The Contest is subject to these Official Rules except as expressly stated otherwise. No purchase necessary to enter or win. A purchase or payment will not increase your chances of winning. The Contest is sponsored by R.S.V.P. Food & Party Outlet, P.O. Box 1910, Akron, OH 44309 (the “Sponsor”)

1. Eligibility: The Contest is open to legal residents of Ohio who are at least eighteen (18) years old at the Contest start date. The Contest is subject to all applicable federal, state and local laws, rules and regulations. Void where prohibited.

Store Associates of “Sponsor” are eligible to enter and win. Corporate Associates are ineligible.

3. How to Enter the Contest: Online entries only. To enter the Contest users need to go to the RSVP Food and Party Outlet website, click on RubberDuck’s contest then complete the contest form. No purchase necessary to enter or win.

Only one entry per natural person per day during the Contest Period. In the event of a dispute as to the identity of a winner, the winner will be deemed to be the person in whose name the e-mail account governing the e-mail address was opened. Sponsor is not responsible for late, incomplete, void, corrupted, garbled, misdirected, or otherwise unintelligible Entries and for any problems, bugs or malfunctions Entrants may encounter when submitting their entry. Incomplete, garbled, corrupted, or otherwise illegible entries are void and will not be accepted. Sponsor reserves the right to disqualify false entries or entries suspected of being false and to disqualify an Entrant it finds to be tampering with the entry process or the operation of the Contest or violating these Official Rules.

4. Odds: Odds of winning a prize depend on the number of eligible entries received. For example, if 1,000 entries are received then each entry has a 1 in 1,000 chance of winning.

5. Prize: One (1) winner will be awarded a RubberDuck’s Birthday party at Canal Park valued at $330. Prize includes: Predesignated Stadium Food for 10 Children and 10 Adults, a special treat for the birthday child AND a $100.00 RSVP Food and Party Outlet Gift Card. Certain restrictions apply. No substitution, transfer, or cash redemption of prize permitted, provided however that Sponsor reserves the right to substitute a prize with another prize of equal or greater value should the advertised prize become unavailable for any reason. Selected Entrant cannot assign or transfer their prize to another person or business. Selected Entrant is solely responsible for any and all federal, state, and local taxes on prize. All activities related to the prize are at the Selected Entrant’s own risk and subject to whatever restrictions are imposed by the entities that govern such activities. Purchases of alcohol, tobacco and lottery are excluded when R.S.V.P. Food & Party Outlet gift cards are provided as prizes. If prize notification or any prize is returned as undeliverable, prize will be forfeited and an alternate Selected Entrant may be selected. Sponsor will not make multiple attempts to contact Selected Entrants.

6. Winner Selection and Notification of Selected Entrant: On or about September 10, 2018 (“Drawing Date”), One Entrant will be randomly selected by a representative of Sponsor from among all eligible entries received by the respective Drawing Date. By participating, Entrants agree to abide by these official rules and the decision of Sponsor which is final and binding in all respects.

Prizes shall only be mailed in the United States, and only if the Sponsor agrees to the mailing.

7. Publicity: By participating in the Contest, any Entrant in the Contest, irrevocably grants the Sponsor and their respective successors, assigns and licensees, the right to use the Entrant’s name, likeness, biographical information in any and all media for any purpose, including without limitation, commercial, advertising and promotional purposes as well as in, on or in connection with the Website or the Contest or other promotions, and hereby release the Sponsor from any liability with respect thereto, unless prohibited by law.

8. General Conditions: By participating, Entrants agree to be fully and unconditionally bound by these Official Rules and the decisions of Sponsor and waive any right to claim ambiguity in the Contest or these Official Rules. Any portion of the Contest may be canceled, suspended and/or modified, in whole or in part, if in our opinion any fraud, technical failure or other factor beyond our control impairs the integrity or proper functioning of the Contest. Sponsor reserves the right in its sole discretion to disqualify any individual who is found to be tampering with the entry process or the operation of the Contest or the Website, to be acting in violation of these Official Rules, or to be acting in an unsportsman-like or disruptive manner, with the intent to disrupt or undermine the legitimate operation of the Contest, or to annoy, abuse, threaten, harass any other person, and Sponsor reserves the right to seek damages and other remedies from any such person to the fullest extent permitted by law. You may not enter with multiple identities or use any automated system, bot or other device or artifice to enter or obtain more than the maximum, number of qualified entries. Unclaimed Prizes will not be awarded. All federal, state or other tax liabilities (including income taxes) arising from this Contest will be the sole responsibility of Selected Entrant. Entrants may be issued an IRS Form 1099 for the ARV of any awarded prize. CAUTION: ANY ATTEMPT TO DELIBERATELY DAMAGE OR UNDERMINE THE LEGITIMATE OPERATION OF THE CONTEST MAY BE IN VIOLATION OF CRIMINAL AND CIVIL LAWS AND WILL RESULT IN DISQUALIFICATION FROM PARTICIPATION IN THE CONTEST. SHOULD SUCH AN ATTEMPT BE MADE, SPONSOR RESERVES THE RIGHT TO SEEK REMEDIES AND DAMAGES (INCLUDING ATTORNEY FEES) TO THE FULLEST EXTERT OF THE LAW, INCLUDING CRIMINIAL PROSECUTION.

9. Limitations of Liability: If for any reason an entry is confirmed to have been erroneously deleted, lost or otherwise destroyed or corrupted, the Entrant’s sole remedy is another entry in the same Contest during the Contest Period. Selected Entrants also agree to release, discharge, indemnify and hold harmless Sponsor, and each of their respective officers, directors, employees, representatives and agents (collectively “Releases”) from and against any claims, damages, disability, attorneys’ fees, and costs of litigation and settlement, as well as any liability due to any injuries, damages or losses to any person (including death) or property of any kind resulting in whole or in part, directly or indirectly, from (i) use, redemption, acceptance, possession, ownership, or misuse of any prize, (ii) participation in any activity, event, or excursion offered in connection with the prize, (iii) use of any facility, service and/or accommodation related to the prize, or (vi) participation in any Contest– related activity or participation in this Contest. The Releases shall not be liable for: (i) late, lost, delayed, misdirected, incomplete unreadable, inaccurate, garbled or unintelligible entries, communications or affidavits, regardless of the method of transmission; (ii) telephone system, telephone or computer hardware, software or other technical malfunctions, lost connections, disconnections, delays or transmission errors; (iii) data corruption, theft, destruction, unauthorized access to or alteration of entry or other materials; (iv) any injuries, losses or damages of any kind caused by the prize or resulting from acceptance, possession or use of a prize, or from participation in the Contest, or (v) any printing, typographical, administrative or technological errors in any materials associates with the Contest. Without limiting the generality of the foregoing, Releases are not responsible for computer malfunctions, network connections, email delivery problems, systems failure or incompatibility, typographical. Technical or key-stroked errors or interruptions in your internet service, and for incomplete, illegible, misdirected, misprinted, late, lost, damaged or stolen notifications. In the event Sponsor is prevented from continuing with the Contest as contemplated herein by any event beyond its control, including but not limited to fire, flood, earthquake, explosion, labor dispute or strike, act of God or public enemy, or any federal, state or local government law, order, or regulation, or other cause not reasonably within Sponsor’s control (each a “Force Majeure” event or occurrence), then subject to any governmental approval which may be required, Sponsor shall have the right to modify, suspend, or terminate the Contest. If the Contest is not terminated before the designated end date, Sponsor will (if possible) select the winners from all eligible, non-suspect Submissions received as of the date of the event giving rise to the termination. The invalidity or unenforceability of any provision of these rules shall not affect the validity or enforceable or illegal, these rules shall otherwise remain in effect and shall be construed in accordance with their terms as if the invalid or illegal provision were not contained herein.

10. Disputes: Decisions of Sponsor are binding and final. In the event of a dispute as to any entry, the authorized account holder of the email address used to conduct a search will be deemed to be the entrant. No claimant in any dispute involving Sponsor shall be entitled to claim or obtain indirect, punitive, incidental or consequential damages. Sponsor’s failure to enforce any provision in these Official Rules shall not constitute a waiver of that provision. Any disputes will be governed by the R.S.V.P. Food & Party Outlet Arbitration Panel. 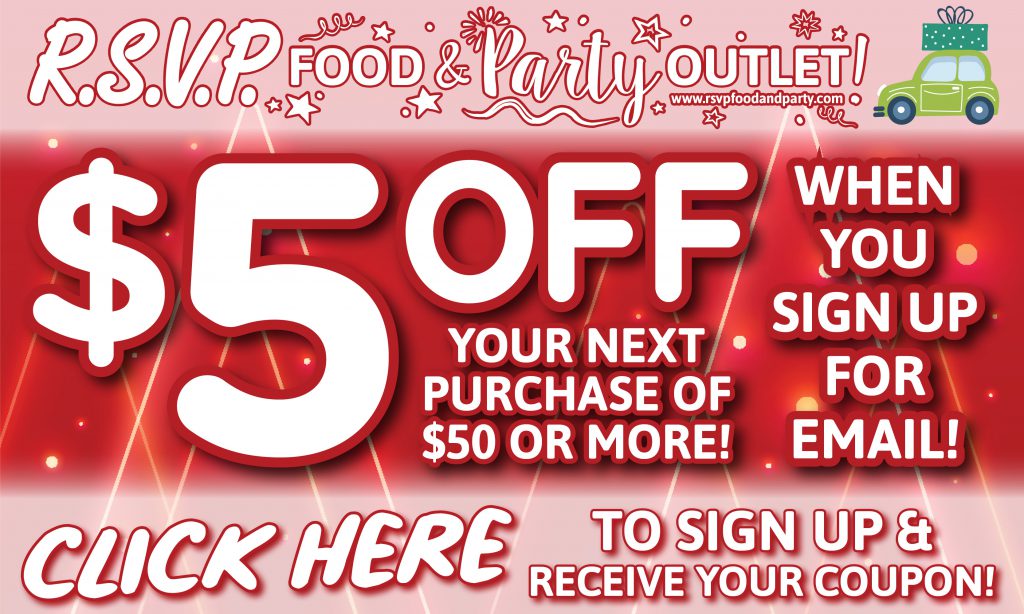